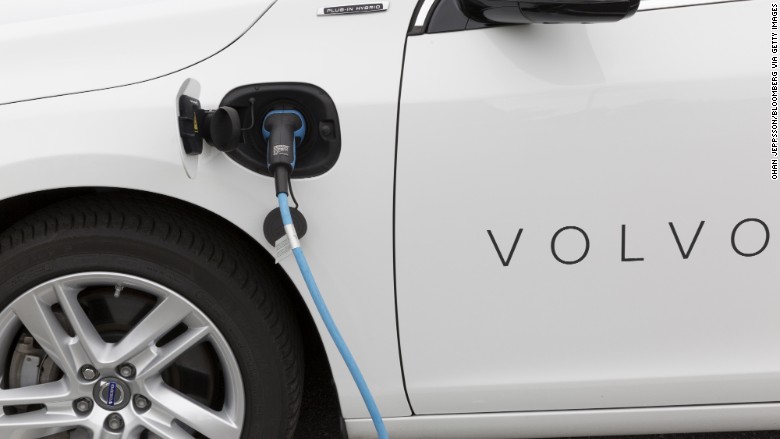 What it is: Volvo announced that after 2019, they will only sell cars that have an electric motor in them.

Volvo can see the future, partly because they’re now owned by a Chinese company and China is plagued with air pollution partly coming from gas-powered cars. China’s air quality is so bad in the big cities that China has the largest number of Parkinson’s Disease in the world. China must either clean up its air or literally kill all its citizens.

That’s why Volvo announced that the future after 2019 will involve either all-electric cars or hybrids. Hybrids can ease the transition to electric cars but the future is definitely no longer gas. If the auto industry plans to shift away from gas, what will happen to the world of gas stations? They’ll need to convert to fast-charging electric charging stations instead. Just as you now pay for gas, you’ll need to pay for electricity to recharge your car. Whether that will be cheaper than gas won’t matter as much as electricity won’t be as polluting as car emissions.

(Of course the real question is how will that electricity be generated? If it’s done by coal-burning plants that pollute the air, then the savings in air quality from electric cars will need to offset that pollution created by power plants. The difference is that power plant emissions can be relatively isolated while car emissions follow cars wherever they go.)

Look at the ripple effect electric motors will have in the future. The way we drive tomorrow won’t look like the way we drive today. Expect too see fewer cars on the road (thanks to ride-sharing services), fewer accidents (thanks to self-driving car technology), and fewer car dealers because fewer people want or will need to own their own car.

This is why Apple, Google, and Tesla are charging ahead in the self-driving technology field because they know it will be profitable. Whether the Apple Car becomes a product or not, the research learning about self-driving technology will prove valuable in itself. If Apple never releases the Apple Car, they’ll have the know-how to create an integrated experience for cars that will only benefit them in the future when they further develop CarPlay as an entertainment option in cars.

What Microsoft could learn from self-driving cars would directly apply to their research in machine learning for other fields like voice recognition. Avoiding self-driving car technology research is like avoiding the mobile computing market.

Most likely there will be no single winner in the self-driving technology market. The Apple Car isn’t going to dominate the market because other companies will be offering roughly equal technology. The real treasure isn’t in trying to be the only or best self-driving car company in the world, but in learning what’s possible and knowing how to benefit from self-driving car technology.

The future is clear. Volvo can see the short-term future in electric cars. Apple, Google, and Tesla can see the longer future in self-driving technology, but both are right. The people who are wrong are the ones who always say the world won’t change and then get surprised when it does.

To read more about Volvo’s decisions to sell cars with electric motors after 2019, click here.

What it is: Tesla sells directly to the public and has taken nearly 300,000 pre-orders so far.

The easiest way to spot change is to look for success and question why the current leaders in the industry missed their opportunity. The latest change in the world comes in the car industry that hasn’t seen any revolutionary change in over a century.

The way you bought a car used to work like this. First, a car company made a mediocre car but focused on styling to convince you to buy a new one. Basically each new car model was nearly identical to last year’s model with minor improvements.

Second, you had to buy a car from a dealership where salesmen tried to manipulate you by practically cheating and lying to your face so they could make as much money off you as possible. This made the car buying experience adversarial at best and far less satisfying and appealing to practically everyone.

Third, once you bought a new car, the appeal lasted about a week. After that, most people rarely thought of a car as anything more than another form of transportation.

Tesla changed all that.

First, Tesla strives to create cutting edge cars that look like something out of science fiction. Second, Tesla sells directly to customers without the nuisance of annoyance of a middleman, deceitful sales person. Third, Tesla cars continue to provide satisfaction to its customers by giving people pride in ownership. When you own and drive a Tesla, you feel you’re in a special group with other Tesla owners, which is much the same aura of togetherness that Apple generates with their computers, smartphones, and tablets.

Tesla is basically upending the entire car industry that the car industry never thought of challenging because they were making too much money selling mediocre products, ripping people off through scummy sales people, and creating ho-hum products that few people took pride in owning soon after purchasing the product. People didn’t care about owning a Ford or a GM car the same way they feel about Tesla cars because Ford and GM make mediocre cars that do the job and nothing more.

Think of the difference between owning a Macintosh and a generic PC in a beige box. A PC might work just fine, but there’s a distinct lack of pride in ownership with a generic PC compared to a Macintosh. The only PCs that people take pride in owning are specialized gaming PCs with exotic cases that light up or highlight liquid cooling systems. Ordinary PCs don’t generate that same level of excitement in the same way that ordinary cars by Ford and GM hardly generate any excitement at all beyond being a slightly improved model over last year’s model.

Tesla cars not only look like science fiction but they actually deliver quality instead of mediocrity. Tesla is basically duplicating the aura of Apple except in the car industry. That’s the exact same level of excitement Apple products usually get. To buy a Tesla, thousands of people camped out overnight to make sure they could put down their deposit and buy the new Tesla 3. Even though Chevrolet offers a similar electric car named the Bolt, do you see anyone spending the night camped outside a Chevrolet dealer so they could deal with a lying salesman to buy a Chevrolet Bolt?

Tesla is like Apple in the computer industry. By providing a great customer experience with a quality product, Tesla is making their products the one to buy if you want an electric car. If you want something cheaper and less exciting, then you can go with one of the established car company offerings such as the Nissan Leaf or the Chevrolet Bolt. If you want to get excited about a new way to buy cars, you want to give your money to Tesla.

The Big Three auto makers are in trouble just like Microsoft, Palm, Nokia, and Blackberry suddenly found themselves in trouble when Apple started stealing their business away. People want to buy a Tesla. Few people really want to buy a Chevrolet Bolt or a Nissan Leaf. They might buy them because these cars might be cheaper, but even if they aren’t, why torture yourself through the adversarial sales process of a traditional car dealership when you can buy a Tesla with far less hassle?

The Big Three auto makers survived because they had little competition. When the Japanese auto makers started selling quality cars, the Big Three lost their dominant position. Now that Tesla is selling electric cars directly to customers, you can be sure the Big Three will further lose their market share even more. Detroit is about to witness a further downturn in their economy because the Big Three will resist Tesla’s improvements until it’s too late in much the same way that Blockbuster Video resisted Netflix and Redbox until it was too late.

The end of the Big Three business model is over. You may never need to confront a deceitful car sales person ever again just by buying a Tesla and that’s just one of many advantages that Tesla offers over its competitors.

To read more about Tesla’s pre-orders that rival the total number of car models other manufacturers sell in a year, click here.