What it is: The latest rumor claims Apple will drop physical buttons on the Apple Watch in favor of a taptic engine instead.

In the old days of the Apple trackpad, you had to physically press down to give a command. This meant that the trackpad contained physical elements that would move under pressure. However, the latest Apple trackpad never moves at all. Each time yo press on it, a taptic engine gives you tactile feedback that fools your mind into thinking you pressed down when you really didn’t. In this way, the trackpad doesn’t contain any moving parts yet behaves as if it does. This makes the trackpad more reliable than a mechanical version.

Right now, typing on the glass surface of the iPad is still uncomfortable for people. Apple’s long term goal is to use the taptic engine to mimic the feel of a physical keyboard on a sheet of glass. This will allow the iPad to do away with an external keyboard and allow the Macintosh to use a similar taptic engine for its separate keyboard that can also double as a virtual keyboard.

Watch for the future with taptic engines in Apple product. When the Apple Watch gets a taptic engine, look for the iPad to get one eventually as well. When that happens, you’ll finally be able to kiss your physical keyboard good-bye.

To read more about the latest rumor about the Apple Watch’s taptic engine, click here. 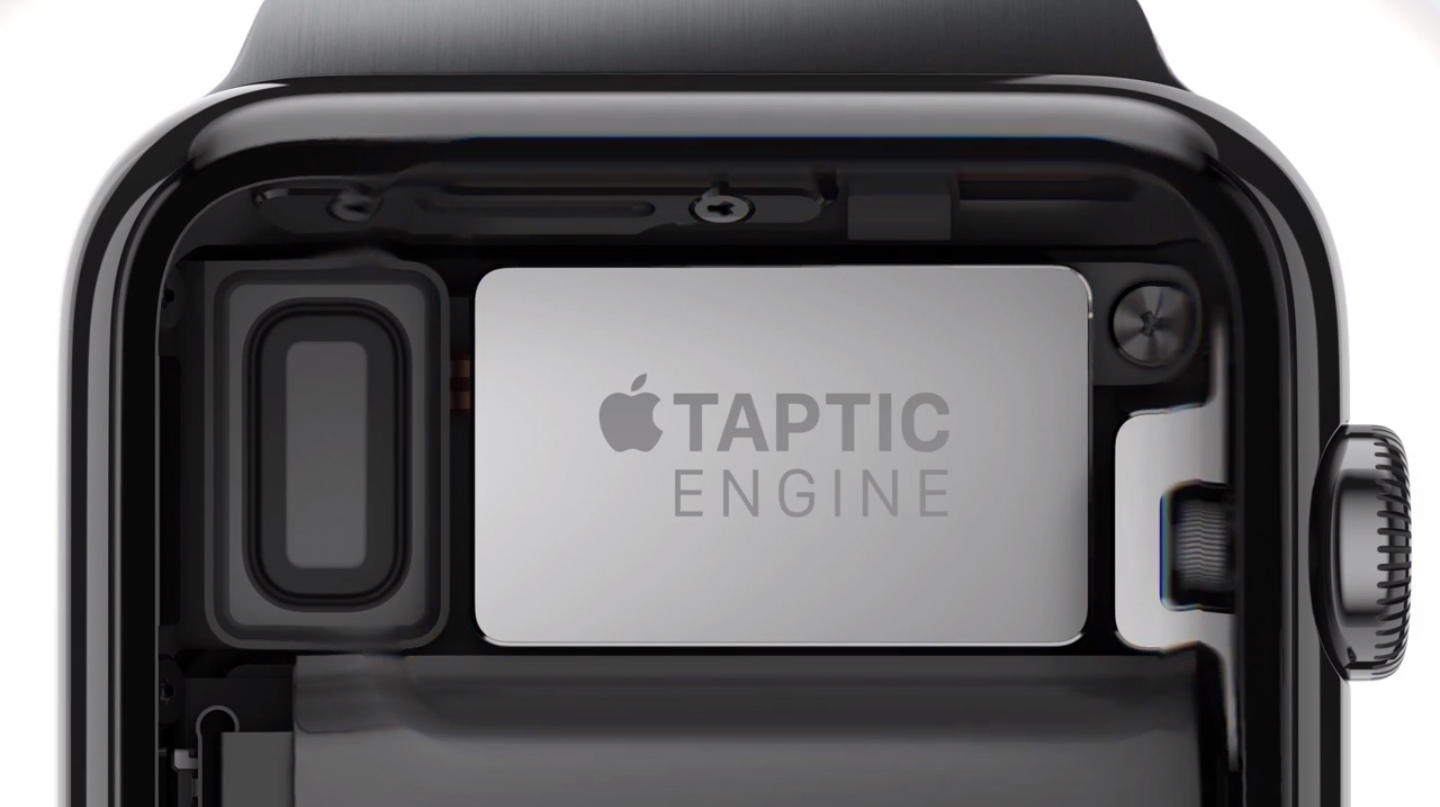 What it is: The Taptic Engine is a way to give feedback to the user through touch. Force Touch is a way to let the user get feedback when touching an item that normally doesn’t provide tactile feedback.

For computers with large monitors, relying on sight alone is fine. However for wearable computers like the Apple Watch, the screen is too tiny to rely on sight alone. That’s why the Apple Watch contains the Taptic Engine that can tap your wrist and notify you when you receive a message. It might sound simple and trivial, but the Taptic Engine provides tactile feedback as a way to expand the user interface to a computer.

Instead of constantly having to glance at a screen to see if you got any messages, you can just strap an Apple Watch to your arm and feel when you get messages. This lets you keep your eyes off the screen and lets you perform other tasks without constantly glancing at a screen.

Force Touch is a different form of haptic technology. With a typical PC, you get tactile feedback from a mouse or keyboard. A mouse and keyboard can be big because they just sit on a desk most of the time. With mobile and wearable computers, space is at a premium. The smaller and thinner the device, the lighter and easier it is to carry around. Given a choice between carrying a heavy mobile phone or a light one, it’s obvious which one most people would choose.

Now consider the flat glass screen of a smartphone, tablet or wearable computer. There’s no tactile feedback other than the feel of your fingertips on a flat piece of glass. That’s why Force Touch lets give commands to a computer through the sensation of touch. Push lightly and you give one command. Push harder and you give a different command. Although the surface itself may be flat and immovable, haptic technology can fool your sense of touch into thinking you’re actually moving an item when you really aren’t.

The trackpad of the latest MacBook laptop uses haptic technology. A mechanical trackpad takes up space so you can press down on it to give commands. The MacBook trackpad physically never moves so it takes up less space. By providing haptic feedback, it gives the illusion that you’re pressing down on it. Thus you get the benefit of tactile feedback without the space required for mechanical devices or the eventual unreliability of mechanical devices.

Most user interfaces rely on sight. Occasionally you may hear a beep to alert you if you’re doing something wrong, but the sense of sight and sound are now being expanded to touch to provide a richer and more immersive user experience. The five human senses are:

To read more about Force Touch and the Taptic Engine in theSmell MacBook laptop, click here.