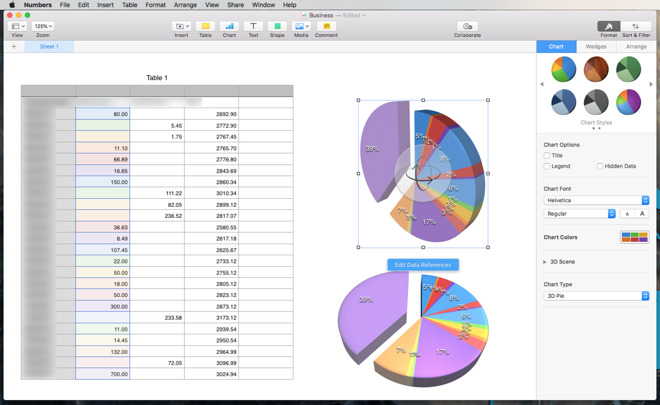 What it is: Numbers is Apple’s spreadsheet available as part of the iWork office suite.

Hardcore spreadsheet users will always rely on Excel, but although Numbers may not be as powerful as Excel, it can actually be easier to use. One huge advantage of Numbers is that Excel creates an entire screen of rows and columns. When you design a spreadsheet, you wind up with numerous empty rows and columns cluttering up the screen.

Numbers, on the other hand, lets you create spreadsheets only as large as you need them. Then the rest of the screen can be filled with charts or even other spreadsheets. Where Excel forces you to work within the fixed widths of columns, Numbers let you create separate spreadsheets on a single page that can have wildly different column widths.

If you’ve never used a spreadsheet before and don’t need to use one professionally at work, then Numbers can be more than enough. It makes creating and using a spreadsheet simpler than Excel. You can always import and export Excel spreadsheets if necessary, but Numbers will never be an Excel clone.

The bottom line is that if you need Excel, use Excel. If you don’t need Excel, try Numbers before buying Excel. With Numbers, you might find a free spreadsheet that’s easier to use than Excel.

To learn more about the features in Numbers, click here. What it is: There’s a tendency to think newer software is more advanced than older software. That’s not always true.

It’s easy to think that anything new must be better than anything old. After all, using today’s macOS looks and feels more versatile than using the old System 7 operating system. Windows 10 is a huge improvement over Windows 3.1. The trouble is that sometimes newer software is still behind the capabilities and features of older software and nowhere is that more apparent than in the spreadsheet world.

VisiCalc was the first spreadsheet and defined how spreadsheets work. The problem is that most spreadsheets have simply duplicated VisiCalc with fancier graphics and more calculating power. Lotus 1-2-3 added a simple database with integrated graphics while Excel added a slick graphical suer interface along with more powerful calculations functions. Yet even the latest version of Excel is nothing more than a fancier version of VisiCalc.

In the past, there have been many alternatives to spreadsheets that are either improvements or alternatives that are easier and more powerful than the old VisiCalc spreadsheet model. One of the first MS-DOS spreadsheet alternatives was Javelin, which was designed for financial modeling. At the time of its introduction in 1985, it even won InfoWorld’s Software Product of the Year award, defeating Microsoft Excel.

Unfortunately, Javelin was more of a specialized tool and not a spreadsheet replacement, it failed to capture a large market. Another spreadsheet alternative came from Lotus Development, which was trying to come up with a new product after Lotus 1-2-3. Lotus came up with Lotus Improv, which borrowed features from Javelin. Like Javelin, Lotus Improv found itself used mostly in financial modeling but eventually couldn’t unseat Microsoft Excel.

An even earlier spreadsheet alternative for the Macintosh was called Trapeze. Instead of displaying rows and columns, Trapeze let you create separate blocks that acted like miniature spreadsheets all their own. This made it easy to isolate data and clearly see how they all linked together. Apple’s Numbers spreadsheet mimics Trapeze in this regard, but lacks many of the mathematical capabilities that Trapeze offered way back in 1987.

To read more about Trapeze and its features, click here.

To see a video of Trapeze in action (starting at the 11 minute mark), click here.