What it is: For years, iTunes has been used to play music, movies, audio books, and podcasts. Now Apple is rumored to be breaking iTunes into separate apps.

The iTunes app began as a music player and a way to store songs on an iPod. Then Apple started adding more features to iTunes to play all types of audio and video files including movies, podcasts, and audio books. Not surprisingly, iTunes is now a clumsy, monolithic program that tries o do everything but does none of it well.

Part of the reasoning behind this rumor is that Apple is creating a cross-platform tool that will allow iOS developers to create macOS apps. Apple already announced this cross-platform tool last year so everyone’s expecting them to release it this year.

iTunes is a perfect example of a dedicated program that simply grew too big with more and more features until it became a mess. Few people will mourn the loss of iTunes for doing everything so it’s likely this is a low-risk move on Apple’s part to make everything easier for everybody.

Keep your eye on Apple’s cross-platform tool. This will likely become a major focus at the upcoming Worldwide Developer’s Conference (WWDC), which will allow iOS developers to turn their apps into Macintosh apps as well. This will give iOS developers another way to profit from their work while giving Apple more apps to market and entice others to buy and use a Macintosh.

The future of Apple is iOS. To read more about Apple’s plan to break up iTunes, click here.

What it is: Visual Studio is Microsoft’s coding tool for writing Windows programs, and now it’s coming to the Macintosh.

For decades, every developer knew that if you wanted to make money, you learned how to write programs for Windows. While there are many programming tools available, most developers focus on Microsoft’s Visual Studio for writing programs in C#, Microsoft’s official programming language. C# is an improvement over C++ and meant to be safer than C++ while offering just as much flexibility.

Yet with so many programmers familiar with C#, the big problem was translating their coding skills to the mobile world of Android and iOS. Since Microsoft’s own Windows Phone and Windows 10 Mobile has faltered in the smartphone and tablet market, C# programmers had to either use Java to write Android apps or Objective-C/Swift to write iOS apps. By releasing Visual Studio for the Mac, Microsoft now brings the world of C# programming to Android and Apple products.

So if you’re thinking about writing a program, Microsoft’s solution is to offer you C# so you can write programs for all the major operating systems in the world. If you learn Swift, you’ll get the power to write iOS apps, but your Swift programming knowledge won’t translate into letting you write Windows programs. If you learn Java to write Android apps, you can’t write similar Windows or iOS/macOS programs. Only C# and Visual Studio for the Mac offers you the chance to learn one programming language and be able to write for every major operating system.

That’s the theory anyway. To play it safe, just learn C# and Swift. C# is Microsoft’s official programming language so you’ll be able to write Windows programs and if you also learn Swift, you’ll be able to write iOS, macOS, tvOS, and watchOS apps. The way Apple rapidly updates their operating systems every year, the only language that will support all the latest features will be Swift. Rather than learn just C# and try to write programs for Apple products, learn C# and Swift to make sure you can write for Windows and the world of Apple products.

Visual Studio for the Mac is meant to keep C# relevant beyond the world of Windows. Swift is already relevant in the Apple world and because it’s open source, it’s spreading to other operating systems as well such as Linux and Windows. It may take time before Swift will let you write Android and Windows apps, but that’s what C# is for.

To read more about Visual Studio for the Mac, click here. 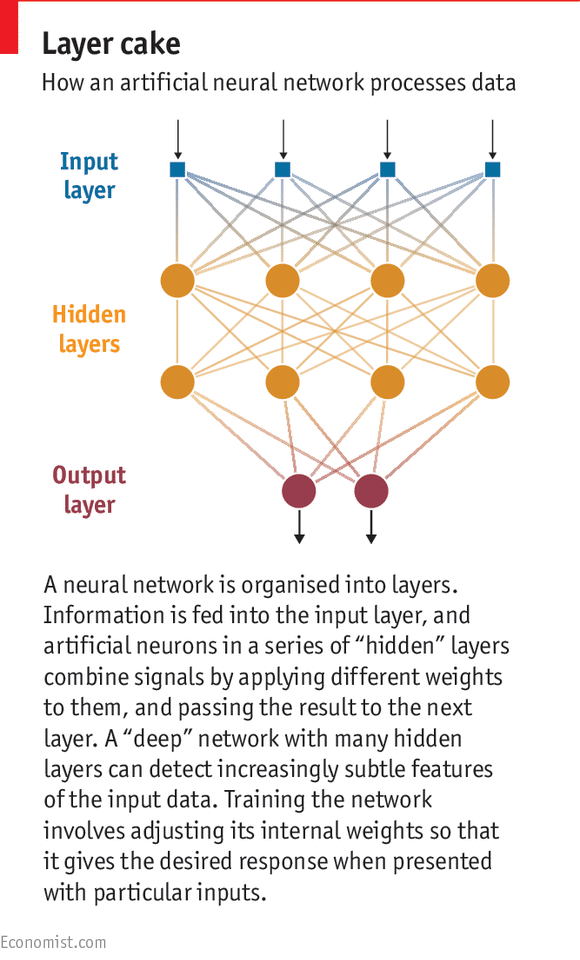 What it is: Neural networks is an artificial intelligence technique to model how the brain works in software.

Artificial intelligence (AI) has been promised since the 1960’s, but it’s finally here. For the longest time, AI has been touted as the next big thing,b ut each time it’s proven disappointing. Early attempts at AI involved something called expert systems, which was nothing more than a series of if-then rules.

The huge problem with expert systems was that they took too long to create. With a knowledge engineer working with a programmer and an expert, creating an expert system was a time-consuming affair. Even worse, once the expert system was done, it couldn’t learn anything new without someone manually modifying it.

Since knowledge in any field changes rapidly, this meant the expert system would become increasingly obsolete over time. Eventually it would get so antiquated that it would be essentially useless. After all, how many people would want to take advice from an expert system containing medical information from the 1950’s?

Because expert systems took so long and couldn’t be modified, they were largely ignored as too troublesome to create and too cumbersome to constantly update. That’s why AI remained absent from the commercial world for decades.

Creating a neural network involves mathematical calculations, but Apple has now created a new software framework called basic neural network subroutines (BNNS), which is a collection of functions to implement and run a neural network. By creating this framework, you can easily create your own neural network without worrying about the details of calculations. This makes it easy to add neural networks to any macOS, iOS, tvOS, or watchOS apps you might create using Objective-C or Swift.

Artificial intelligence is here to stay.