What it is: A Calgary woman used her Apple Watch to call for help when a man broke into her home to rape her.

A woman in Calgary was wearing her Apple Watch when a man broke into her home to rape her. She used her Apple Watch to contact her boyfriend, who contacted police. When police arrived, they caught the potential rapist hiding in a closet.

The Apple Watch succeeds precisely because it’s a wearable computer. Mobile computers like smartphones and tablets took off because you can use a computer wherever you go, which is simply not possible with a desktop or even a laptop that won’t turn on right away.

You can drop a smartphone or forget to bring your tablet with you. However, once you put a wearable computer on, it’s with you no matter what. Now if you fall or need help, the wearable computer is right there with you, which may not be true with a mobile computer.

The Apple Watch is just the beginning of a wearable computer. Future wearable computers can include devices in your ears to not only listen to music but to give you audio feedback as well. Another type of wearable computer will be smart glasses that will let you see augmented reality through special lenses.

If you still can’t figure out a use for the Apple Watch, you’re not thinking hard enough. The Apple Watch will only get better and more useful over time. If you don’t have a wearable computer yet, you will sometime in the future. Either that or you can get left behind like someone who refuses to use a smartphone in favor of a laptop.

To learn more about how a woman used her Apple Watch to call for help, click here.

What it is: Apple recently patented smart bands for the Apple Watch.

The Apple Watch has always been constrained by its smaller size that needs to fit comfortable on a user’s wrist. While the Apple Watch provides sensors to detect heart rates and skin moisture, there’s only so many sensors Apple can put on the physical size of the Apple Watch. Even worse is that some people may not want certain types of sensors while other people do.

One long-rumored sensor that Apple is working on is non-invasive glucose monitoring. This would provide a way for diabetics to monitor their blood sugar level without breaking their skin to get a blood sample. Since only diabetics would want such a sensor, it makes sense to offer it as an optional smart band that can work with any Apple Watch.

Mobile computing (smartphones and tablets) are slowly taking over the traditional PC market just as PCs gradually took over from the mainframe and minicomputer market.

Now wearable computers offer the next big leap forward as people start wearing their computers instead of carrying them with them.

The future of the Apple Watch is smart bands and the future of computing will be wearables whether strapped to your wrist, stuck in your ear, or propped on your face.

What it is: The “killer” app for the Apple Watch is real-time health monitoring.

The whole purpose of technology is to solve a problem that was too difficult or impossible to solve previously. The PC made computers accessible to more people beyond the mainframe and minicomputer users. What made the PC useful was the spreadsheet, first embodied by VisiCalc and then by Lotus 1-2-3. People bought PCs specifically to use spreadsheets.

The Apple Watch first appeared with no specific purpose in mind, but the latest Stanford study indicates that the Apple Watch does a decent job detecting heart abnormalities. To detect this usually requires expensive equipment at a doctor’s office, but the Apple Watch is bringing this capability to the masses. That makes real-time health monitoring the real killer app for wearable computers.

The next step for wearable computers will be health enhancement. That can come with smart glasses that enhance a user’s vision while also tracking health conditions at the same time. Real-time health monitoring and enhancement is the ultimate goal of wearable computers.

To read more about the Apple Watch and its reliability in detecting health problems, click here.

What it is: An Apple Watch detected a man’s fall and called for help.

67-year-old Toralv Ostvang fell in the bathroom, fracturing his face in three places. Fortunately, Toralv was wearing an Apple Watch that detected his fall and automatically called for help when it detected Toralv was not moving after the fall.

Emergency crews responded to the Watch’s alert beacon and said he would likely not have survived the night if he hadn’t received immediate help. That means the Apple Watch helped save one man’s life and its automatic fall detection feature will likely save many more lives in years to come.

Because of its fall detection feature and other health-related options, the Apple Watch is ideally suited for senior citizens. By providing help when the wearer is unable to do so, the Apple Watch can save lives.

The Apple Watch’s main purpose is simply real-time health monitoring, which can literally save lives. As the Apple Watch gains more features such as non-invasive glucose monitoring, it will continue offering health benefits that were too expensive or impractical to track with current technology.

The Apple Watch is a huge success simply because it has a clear purpose to monitor health. What Apple needs to do with their other products is define an equally important purpose.

Anyone know what’s the one compelling reason to use HomePod? HomePod offers hands-free computing, but beyond that, what purpose does it serve to solve a problem that other products can’t do as well? The lack of a clear answer is the reason why HomePod isn’t as popular or profitable while the Apple Watch continues growing in popularity and importance.

If you don’t have an Apple Watch yet, get one or something similar to track your health. A wearable computer like the Apple Watch could one day save your life.

To learn more about how an Apple Watch saved one man’s life, click here.

What it is: Apple’s hiring of health related talent has increased 400% since 2017.

At one time, Apple relied on the Macintosh computer for all its revenue, but the world had already standardized on Windows so Apple had little room for growth focusing on personal computers.

Then Apple introduced the iPod and iTunes, and suddenly portable music players and music downloads gave Apple a huge boost in revenue while helping it rely less on the Macintosh.

When smartphones threatened to kill the iPod market, Apple reduced their dependence on the iPod by releasing the iPhone. The iPhone proved so popular that it defined the current smartphone market.

Not only is Apple reducing their future revenue guidance due to slowing iPhone sales, but Samsung is also forecasting a downturn in smartphone sales as well. The problem isn’t just Apple but the overall smartphone market.

That’s why Apple has been diversifying recently with services such as Apple Music, Apple Books, and Apple Pay. the idea is to reduce dependence on hardware and make money whether people are using older products or not.

With iPhone sales slowing and showing no signs of suddenly picking up ever again, Apple needs a new market to target and that new market will likely be health, led by wearable computers such as the Apple Watch.

Like the iPhone, the Apple Watch has gone through major improvements with each generation although there’s little reason to upgrade each year with the Apple Watch.

However what will keep people pinned to the Apple Watch will be its improving health sensors. Since everyone (especially older people) are concerned about their health, it’s easy to see how wearable computers such as the Apple Watch and future Apple smart glasses product can use health as their primary focus, targeting the world’s aging population.

Far more people care about their health than care about using the latest smartphone. For that reason, health will be Apple’s new focus. Unlike smartphones, health-related products take more time to develop, which means it will be harder to take off-the-shelf components and slap them together to mimic an Apple Watch.

The iPhone is fine, but it will no longer be the primary driving force of Apple any more just like Apple no longer depends on the iPod or the Macintosh for the bulk of its revenue.

Health is the new focus because everyone is a potential customer, even people who don’t like Apple. Such people will have to decide if their health is more important than their irrational dislike of Apple because their lives literally depend on their decision.

To read more about Apple’s shift towards health, click here. 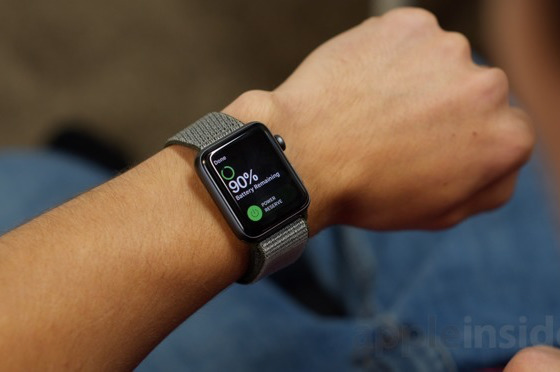