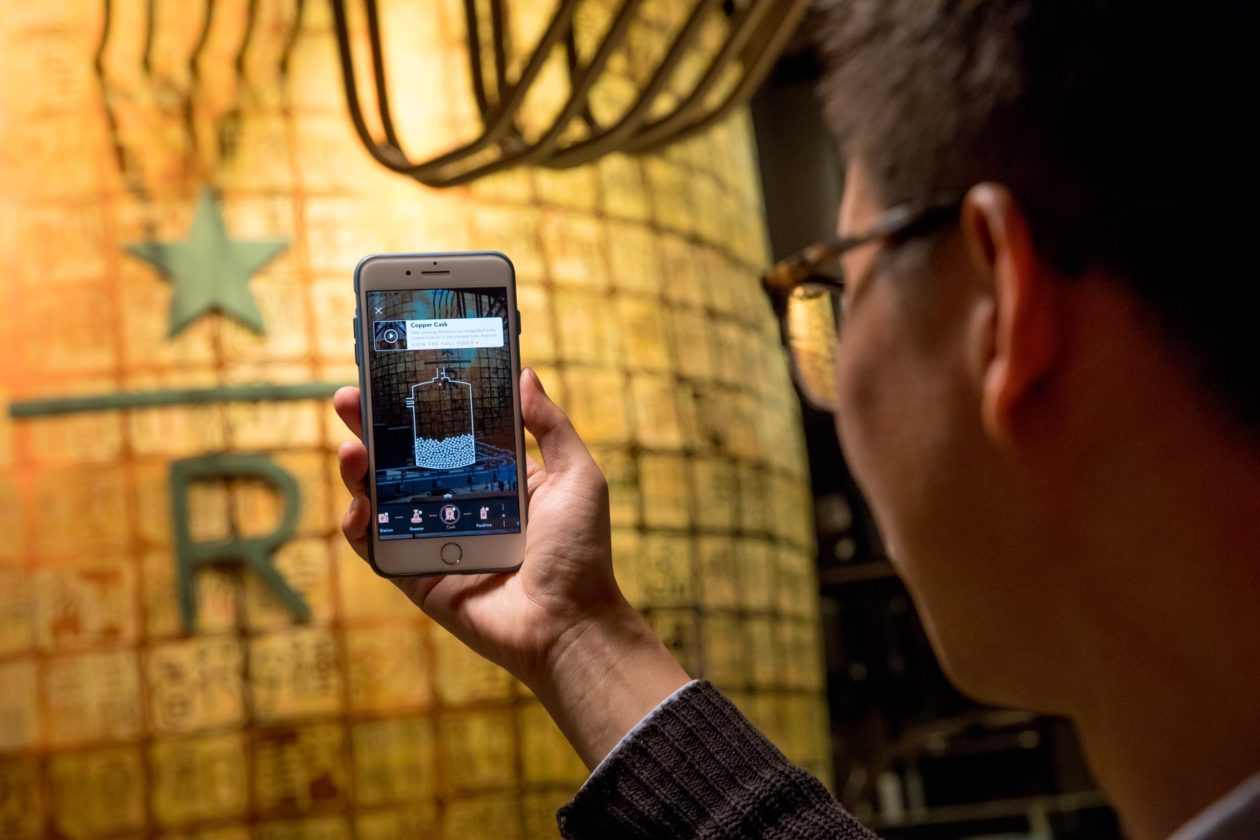 What it is: To give customers an added incentive to visit and stay in their latest Starbucks in Shanghai, Starbucks is using augmented reality.

Starbucks in Shanghai may have found a way to make augmented reality profitable. The company recently opened the world’s latest Starbucks in Shanghai. To make this store more memorable, they offer an augmented reality experience where customers can point their iPhone at different parts of the tore to see how the equipment works. For example, customers can aim their iPhone at a roaster and see further explanation for how that equipment works to make Starbucks coffee.

Augmented reality is still in its evolutionary phase where people are still experimenting with its potential and trying to understand what it can do before finding ways to apply it in business. Starbucks is simply showing one way to make augmented reality an educational and promotional experience.

What it is: Apple Pay Cash is moving Apple towards the world of digital and cryptocurrencies.

Apple Pay Cash links to credit card or debit cards so in the United States, that means transferring US dollars. However, what if you could link cryptocurrencies like Bitcoin to a debit card? Then you would be able to transfer cryptocurrencies to others using an iPhone.

Apple already supports apps for letting you transfer cryptocurrencies so there’s little to stop them from allowing anyone to link cryptocurrencies to an Apple Pay account. Now that you can pay for purchases using Apple Pay, you can digitally transfer money to another iPhone user in seconds using national currencies or cryptocurrencies. That person can then spend that money in any place that accepts Apple Pay and the particular currency the user wants to spend.

Cash can be stolen, but it does offer anonymity and privacy (along with the ability to hide a record of what someone else may have paid you). Apple Pay Cash tracks the money so it’s easy to follow its movement so that eliminates the anonymity advantage of cryptocurrencies, but that may not matter to many people who just want the convenience of sending and spending money on their iPhone or Apple Watch.

As more people get comfortable using Apple Pay for purchases and sending cash to others using Apple Pay Cash, this will simply help further promote Apple products that support Apple Pay such as the Macintosh, iPhone, iPad, and Apple Watch. The key to sending and receiving money digitally revolves around security, and Apple offers TouchID for fingerprint recognition and now FaceID for facial recognition.

Right now to use Apple Pay on a Macintosh, you have to use the iPhone, but in the future, expect security measures like fingerprint and facial recognition to offer an additional layer of security to using a Macintosh. Whatever happens in the future, the obvious fact is that people are not going to go back to carrying wads of cash any more. Credit cards are morphing into smartphones and wearable computers like the Apple Watch. Cryptocurrencies are going to appear but it doesn’t matter which ones dominate because they’re all going to need the security and widespread user base of iOS.

The future of money is right in your hands.

To read more about the latest cryptocurrencies Apple allows on their App Store, click here. What it is: The latest version of iOS 11.2 includes Apple Pay Cash for US residents.

Kenya has been on the forefront of mobile banking for years with M-PESA, which let people send and receive money without going to a bank and carrying cash that could be lost or stolen. M-PESA took off in Kenya precisely because people lacked access to banks. Now the idea of mobile payment has finally arrived in America with the introduction of Apple Pay Cash.

The idea is simple. Two people set up an Apple Pay account for free, which links to a credit card or debit card account. Now you can send money through Apple Pay Cash and iMessage to another person who also has an Apple Pay account. There’s no transfer fee beyond the 3% transaction fee every credit card issuer charges, but if you send money through a debit card, you won’t pay any transaction fee at all.

This means you can freely send and receive money without carrying cash that could be lost or stolen, just like M-PESA. To validate payment, you can use TouchID or FaceID to verify your fingerprint or face before sending the money to someone else. Apple Pay Cash will simply help iPhone and iPad users share money within the iOS ecosystem. That means if someone else uses Android, they’ll have to rely on a rival mobile payment service like SquareCash.

Such fast and rapid payments between iOS devices means paying transaction fees through Western Union money orders or similar services is now obsolete. When you can send money quickly and easily through Apple Pay Cash, why would you want to use any other service unless you don’t have a credit card or debit card? This will motivate more people into getting a credit card or debit card just so they can use Apple Pay and Apple Pay Cash.

Money is becoming less important over time in the form fo paper and coins. Nowadays, money is mostly on credit cards and debit cards, and soon it will be digital in the form of Apple Pay Cash. As more retailers accept Apple Pay, Apple Pay Cash will only get more popular over time. One day, you’ll be able to leave your wallet behind and store everything on your iPhone. Just make sure you don’t lose your iPhone.

What it is: Pixelmator Pro recently became available and uses machine learning to help identify items in an image.

For years, graphic artists relied on Adobe Photoshop to edit images. The problem as that Photoshop kept getting more expensive. Then Adobe stopped selling copies of Photoshop altogether and went to a subscription model that required people to pay a monthly fee. Many graphic artists simply paid that monthly fee but many others rebelled at the idea of constantly paying to use Photoshop. That’s why many Macintosh users simply switched from Photoshop to rivals such as Affinity Photo and Pixelmator.

Pixelmator is relatively inexpensive (under $30) but is over 10 years old, which means it was likely written in Objective-C. The Pixelmator programmers decided to rewrite their app completely using Swift, which gave them  chance to redesign their program to create a much more powerful graphics program dubbed Pixelmator Pro ($59). Despite its higher price over the original Pixelmator, it’s still far cheaper than subscribing to Adobe Photoshop. Best of all, Pixelmator uses the latest Apple technologies, such as Metal, to provide optimized graphics performance that Adobe Photoshop cannot match because Photoshop’s code must be cross-platform to support Windows and Macintosh users.

So not only is Pixelmator Pro optimized for the Macintosh, it’s also cheaper than Photoshop. One example of Pixelmator Pro taking advantage of Apple’s latest technology is the inclusion of machine learning to identify objects in an image. As more macOS programs get written entirely in Swift, expect macOS programs to offer superior performance compared to cross-platform rivals that can’t offer similar levels of performance on the Macintosh.

As any programmer can tell you, code gets bloated over time and Pixelmator’s original 10-year old design means lots of code likely isn’t optimized for today’s Macintosh. That’s why rewriting Pixelmator Pro entirely in Swift to take advantage of Apple’s frameworks like Metal will make a huge difference in Pixelmator Pro’s performance. As the first version, there’s likely to be flaws in Pixelmator Pro but you can expect the company to quickly address these issues and keep improving the program over time.

If you’re a graphic artist tired of paying for Adobe Photoshop, Pixelmator Pro may be a viable option. Given its low cost and optimization for the Macintosh, you may find you don’t need Adobe Photoshop after all.