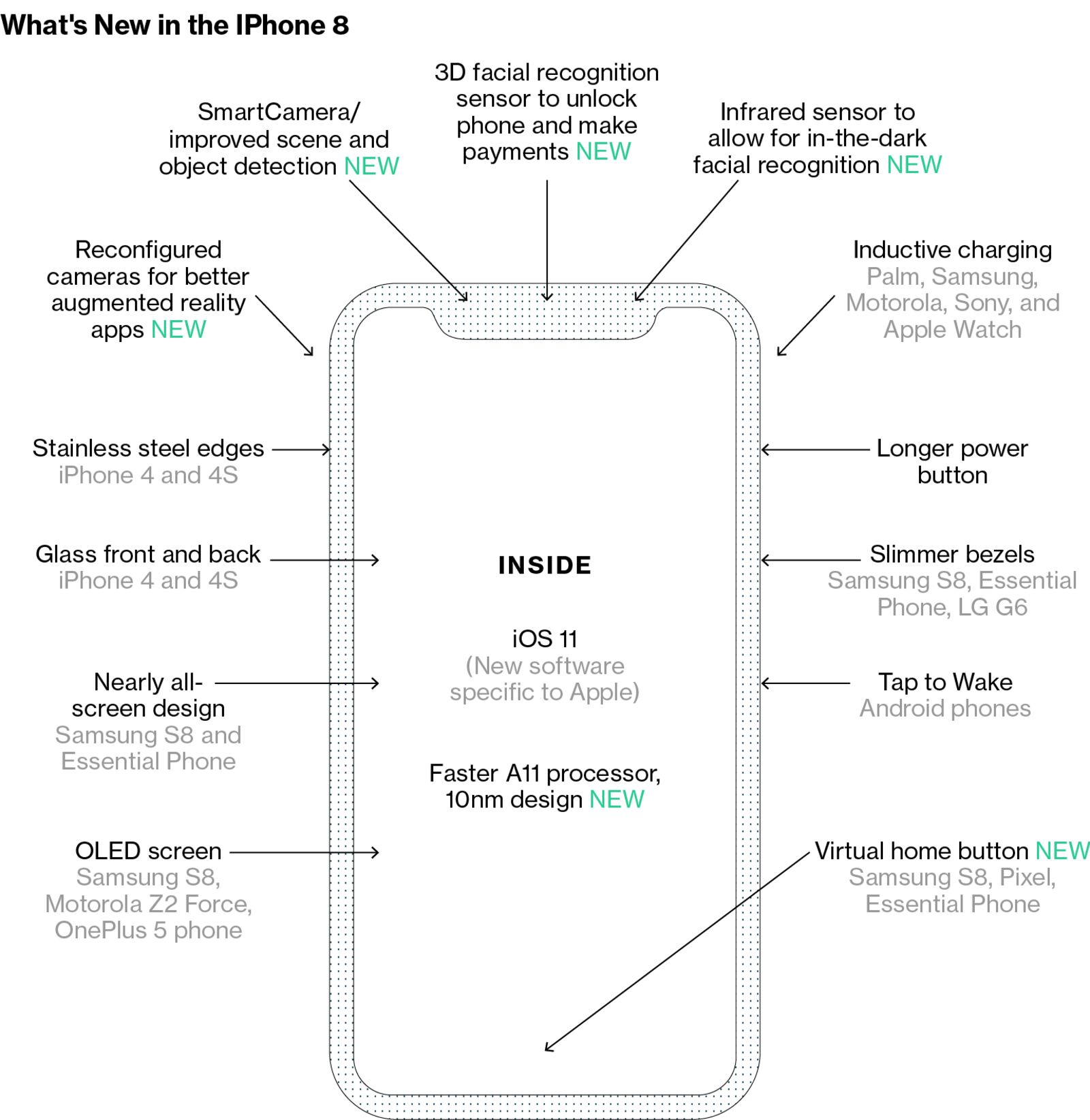 What it is: Apple announced a September 12 event where they will announce new products.

On September 12, Apple will use the new Steve Jobs theater to announce new products, specifically the iPhone 8. While most people will be looking at the hardware improvements such as wireless charging along with changes in the Home button, hardware improvements are trivial. Expect the camera to improve (as usual), but the real change will be in the software.

FaceTime should be another app that uses augmented reality. Apple had previously acquired a company called FaceShift that worked on facial recognition along with another company called Emotient that worked on identifying emotions in a person’s face in real-time. This would allow FaceTime to recognize faces and the emotions of the person looking back at you, which might be a good reason not to use FaceTime if you have to deal with an unpleasant conversation.

Apple could also release a new app that scans 3D objects. That’s because Apple acquired a company called Flyby Media that could identify 3d objects, which could be used to scan items for later 3D printing and to identify objects seen through a camera. Flyby Media’s technology will likely be used to identify objects in a camera to overlay augmented reality items over it such as in an indoor Maps direction app.

Technology advances alone are meaningless. The best technology advances are those that include useful demonstrations that clearly show why those technical features are needed by ordinary people to solve previously unsolvable problems.

What it is: Google announced ARCore, a set of tools for creating augmented reality apps on Android.

So even though Android has a larger market share, fewer Android devices can run ARCore. In the meantime, iOS has a much smaller market share than Android, but a large majority of those users will be able to use augmented reality.

Android devices have largely caught up to the iPhone and iPad in terms of hardware, but they stumble consistently in trying to catch up to iOS in software. Android devices typically need faster processors and more memory just to fall behind slower iPhone/iPad processors that use less memory. Now with augmented reality about to arrive this fall, Apple has a new way to differentiate their products from Android competitors. Android can fight back with ARCore, but ARCore does no good if it can’t run on the majority of Android devices available today.

The future belongs to augmented reality. Now it’s just a matter of seeing how much of a lead Apple can create between themselves and Android when it comes to the growing augmented reality market.

What it is: Developers have been using ARKit to create different uses for augmented reality.

It’s no secret that Apple has been acquiring augmented reality companies over the past few years. With the recent release of ARKit, Apple has now given developers access to their augmented reality features and that will simply generate more momentum towards buying and using iPhones and iPads.

One unique example of augmented reality is Kabaq, which lets restaurant patrons examine 3-D images of food so they can see exactly what they’re ordering. In many Japanese restaurants, they use wax depictions of food so you can see what you’re ordering. Now with Kabaq, patrons can use an iPad to view possible food choices. This will likely dominate the restaurant industry and kill the Japanese wax food industry.

More importantly, Kabaq demonstrates the latest possibilities of augmented reality to show you something that doesn’t really exist. Expect Kabaq to spread widely throughout the high-end restaurant industry as both a unique feature for restaurants and a way to give customers exactly what they want.

In the world of mobile operating systems, Android wins by market share, but iOS will win in terms of convenience and advanced features. The biggest growth of iOS will come from augmented reality and it will come at the expense of Android. Android needs to offer similar augmented reality features that work on all Android devices, and that will come within a few years, but by then iOS will cement its position as the best platform for augmented reality.

What it is: The New York Police Department (NYPD) wasted money buying 36,000 Windows Phone smartphones and will now replace them all with iPhones.

Every operating system has its benefits and drawbacks. To choose one operating system out of blind loyalty is foolish, yet that’s exactly what the New York Police Department did back in 2014 when they bought 36,000 Windows Phone smartphones simply because the New York Police Department was already using Microsoft software to run its video surveillance program. That makes as much sense as trying to buy a pacemaker made by Ford just because you happen to drive a Ford truck.

Rather than saddle NYPD officers with obsolete smartphones that were already struggling in the market, NYPD should have just chosen the iPhone or even an Android device instead. Of course, Android smartphones would still have the problem of not being updated regularly, depending on the Android device they bought, so even though every smartphone could be cheaper than the iPhone, only the iPhone could be updated regularly to still be useful years later.

This just shows the short-sighted thinking of saving a penny now and losing a dollar later. For the NYPD t o even think, let alone buy, 36,000 obsolete Windows Phone smartphones is completely foolish when Android and the iPhone were much better long-term options. Now the NYPD has to recover frothier costly mistake that they could have easily avoided by simply avoiding Windows Phone.

The huge problem with Windows Phone is that it came too late. The iPhone set the smartphone standard, Android copied it and offered its software for free. That left no room for Windows Phone to be sold. Given a choice between free or a license fee, device manufacturers easily chose free (Android) and ignored the license fee (Windows Phone). Microsoft simply tried to force their license business model on to the smartphone market and failed.

If Microsoft tried selling operating systems today, they would also fail. Windows (and MS-DOS) succeeded simply because they were the best option at the time. If the PC operating system battle started all over again, Linux would take over because it’s free and the Macintosh would trail in second place. That would leave no room left for Windows, which is exactly what happened in the smartphone market with Windows Phone.

The lesson is clear. Just because you may be using one company’s software doesn’t necessarily mean you should use that same company’s products everywhere. The NYPD found this out the hard way. Hopefully nobody else will make the same mistake again.

To read more about the NYPD’s decision to dump 36,000 Windows Phone smartphones to replace them with iPhones, click here.

What it is: Artificial intelligence (AI) researchers at Apple recently won a Best Paper Award at the 2017 Conference on Computer Vision & Pattern Recognition, one of the most sought after prizes in the field.

Eventually, Apple let their researchers publish papers and in the first year of submitting papers, Apple researchers won a Best Paper Award for a computer vision paper. What’s notable about this award is that it proves that Apple isn’t behind in AI research as many critics have suggested.

Google has been testing self-driving cars for years, long before Apple started so people naturally thought Google has an insurmountable lead. While starting early can be a benefit, such an early head start can be lost if researchers from other companies come up with more creative and innovative solutions. AI research isn’t a matter of starting first and assuming you’ll always stay ahead forever. AI research is a new field that everyone is studying so there’s no fixed way to insure a lead in any part of AI research.

Spending more money and hiring more researchers won’t always be the answer because smaller teams of researchers with less money can still find an innovative solution that larger, better funded teams may overlook. AI research is a brand new field that’s ripe for pioneers from everywhere. The fact that Google got started with self-driving cars earlier than most everyone else is an advantage, but not an insurmountable one. Chances are good that researchers all over the world are ahead of Google in certain areas of autonomous technology while Google is ahead of everyone else in other areas.

Apple was first in commercially developing natural voice language processing with Siri, but despite being first, Amazon and Google seem to have caught up. Still, Siri has the advantage in recognizing more languages than its rivals, but its rivals appear better at understanding the context of spoken commands better.

AI is coming to smartphone and tablet apps along with computer programs for Windows and macOS. AI is the next rapidly growing field of the computer industry so expect to see more companies throwing around the terms of artificial intelligence on their products. AI is going to be a crucial element of software and computer development in the future. Apple’s latest prize award simply shows that Apple is not behind its rivals in AI research after all.

To read more about Apple’s researchers winning an award in AI, click here.

What it is: To encourage people to create programs for Apple products, Apple released a free app development iBook.

Many people use an iPhone, iPad, or Macintosh and want to turn their ideas into actual programs that they can sell or give away to others. However, most people don’t know how to get started. That’s why Apple has been publishing programming tutorials to teach people how to use their latest programming language, Swift, to create apps for all their operating systems including iOS, macOS, tvOS, and watchOS.

There’s a misconception hat learning to create an app takes years of training but that’s not true. Anyone can learn to write programs whether they have any formal computer science skills or not. Programming is a skill that anyone can learn so to help people learn, Apple has been producing free iBooks explaining how to program using Swift.

Second, by promoting Swift programming, Apple wants to encourage developers to write more apps for Apple products. This will only help attract more users to Apple products because they’ll want to access software. In the old days, everyone bought Windows PCs because most software ran on Windows. Nowadays, many people use either an iPhone or an Android device because both platforms offer the most software. No one will even pretend that Microsoft’s Windows Phone has anywhere near the same number of software titles available, so there’s little reason for anyone to buy and use a Windows Phone device. The lack off a software library will kill a platform every time.

The future is clear. Apple wants developers to use Swift. By using Swift, more developers will create apps for Apple products, which will insure that the iPhone, iPad, Apple Watch, Macintosh, and Apple TV remain competitive. Finally, Apple wants to offer exclusive content through iBooks to encourage more people to use and get comfortable reading e-books through iBooks. While the iBookstore may never equal Amazon’s Kindle market, there’s still plenty of room for iBooks to grow and improve. Since Apple makes money selling e-books through iBooks, Apple will just continue making more money by growing their market share for iBooks.

You can’t go wrong with free information so if you’ve ever thought about creating your own app, start by downloading Apple’s free Swift tutorials. Within a short time and with lots of persistence, you too can start selling your own apps on the App Store and help yourself while furthering Apple’s future at the same time.