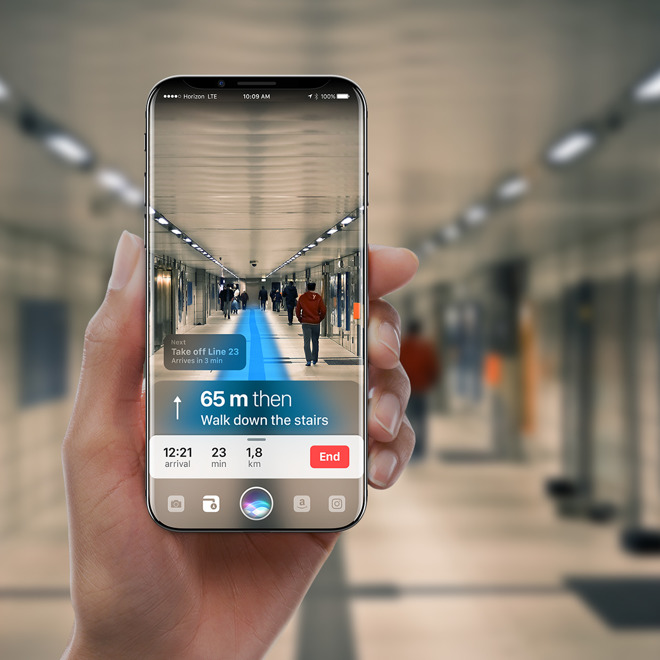 What it is: Augmented reality is coming to the iPhone and here’s one concept for how it might work.

Because augmented reality can work with a smartphone, it’s far easier to implement and use regularly whenever you need it. Compare this to buying a virtual reality headset, carrying it around, and strapping it to your face whenever you want to use it. Given a choice between holding your smartphone up in the air or strapping a virtual reality headset to your face, which do you think most people will want to do?

The main idea behind augmented reality is to show you additional information overlaid on top of the existing image. In the above concept image, augmented reality could show you which direction to walk and approximately how far to your destination. Of course, such augmented reality would be handy for walking directions only if you could track your movement easily indoors, which is probably why Apple acquired WiFiSlam that had technology for indoor tracking.

To get all of these diverse pieces working together is the real challenge. The technical problems can be overcome, but making augmented reality as simple to use is the real challenge. However, once Apple gets everything polished and perfected, guess what? Other companies will find it impossible to duplicate easily.

Augmented reality is the new “iPhone” for Apple. It will literally change the smartphone and tablet market completely. iOS already helped kill the future of Microsoft’s Windows Phone operating system. Augmented reality could be the best chance for Apple to kill Android as well.

To read more about the potential of augmented reality, click here.