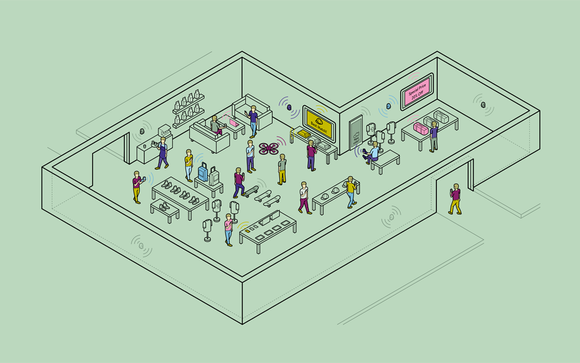 What it is: In 2013, Apple announced iBeacon but now seems to have ignored it.

One of the biggest problems with technology is that companies often introduce it too soon. The fax machine was actually invented back in 1843. The problem was that it relied on telephone lines that were expensive and rare, which meant few people had a need for a fax machine.

The big problem isn’t that technology doesn’t work, but that people had little practical use for it. Back in 1843, the fax machine would still have allowed people to transmit documents over long distances. They just didn’t have the telephone lines to do it so the fax machine had little use, much like carrying an oar around in a car while driving. An oar may be useful for steering a boat in the water, but has no use inside a car.

That’s he problem with many of Apple’s latest initiatives. They’ve fallen into he trap of other technology companies that fall in love with technology for its own sake without taking the time to find a practical use for it first. Back in 2013, Apple introduced iBeacon as a way to use Bluetooth technology to allow people to get messages and ads or special offers just by walking near a store or shelf. From a technology point of view, iBeacon works perfectly. From a practical point of view, why would anyone want to sue it>

To use iBeacon, you have to have a smartphone or a tablet, which most people have. Then you need to turn on the ability to receive iBeacon notifications. That right there eliminates much of the advantages because you must specifically accept them. Since most places do not use iBeacon, there’s no reason to accept them. When you walk into a store or ballpark that does have iBeacon, chances are good you won’t turn on iBeacon notifications on your mobile device because you’ve never had a reason to do so in the past and you still don’t know of a reason to do so in the present.

iBeacon is an example of technology that works but isn’t quite ready for society. What Apple needs to do is find a compelling reason to use iBeacon for consumers. Then promote that one single example and let people’s imagination take over from there to guide iBeacon into being more useful in ways that even Apple may never have imagined.

That’s essentially how the PC industry developed. Apple created expansion slots in the Apple II with no clear idea what people might use them for. All they knew was that expansion slots gave people future flexibility and third-parties rushed to fill the gap with expansion cards that improved the capability of a computer. So even if companies like Apple don’t have a clear idea what the future of technology might hold, they need to find a way to make sure third-parties can exploit that technology.

Right now, iBeacon remains an interesting idea that neither apple nor third-parties seem interested in promoting mainly because nobody can figure out how to make money from it or promote it to the average person. Technology is great but it’s useless when people aren’t ready to use it yet.

To read more about the failure of iBeacon, click here.

« Get Ready for Wireless Charging
Innovation for the Macintosh »