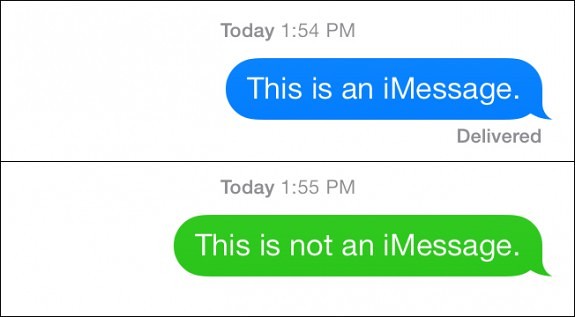 What it is: iMessage is an instant messaging service on iOS that lets you see when messages have been received by others.

What makes the iPhone and iOS in general more attractive isn’t the hardware; it’s the software. Nobody really cares about hardware other than tech-savvy users. The vast majority of people simply want to use a product that works regardless of the amount of RAM or processor speed inside. That’s why software is far more important.

iMessage acts like a simple text messaging service, but offers a blue bubble when a message is actually delivered to someone. Now you’l know for certain that someone got your message. Such a simple feature might not be revolutionary, but it is enough to make you miss it when you don’t have it.

Toss in iTunes and iBooks and if you use one or both regularly, switching to Android becomes even harder. If you rely on Apple Pay and find it convenient, then switching to Google Pay or Samsung Pay won’t be difficult, but will be one more hassle to deal with. Once you’re stuck using a particular ecosystem, it’s far easier to keep using it.

That’s why so many people stay with Apple products and why so many people stay with rival products like Windows and Android. The difference is never hardware but software. If you’re thinking of switching ecosystems, find out what you might be missing when you switch. Chances are good if you don’t rely on your smartphone other than for basic tasks, switching will be easier and simple.

For most other people who do rely on particular features, switching will be far more difficult. The easy solution is to just keep using what you already know. The only reason to switch is when your current solution no longer works, and then you’ll be highly motivated to switch to another operating system.

To read how iMessage keeps one person hooked to iOS, click here.