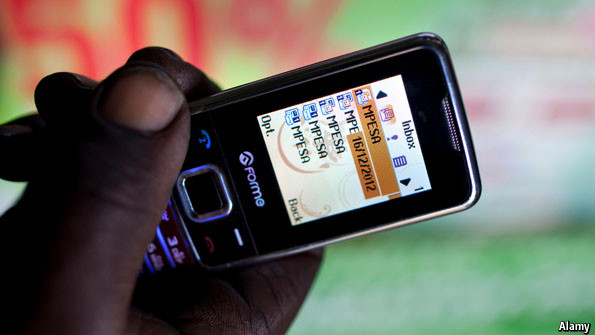 What it is: M-PESA is a mobile money service originally developed in Kenya.

There’s a tendency to believe that the Western countries are the most advanced in the world. While this may often be the case, it’s not always the case. In Kenya, it’s easier to use your mobile phone to pay fora taxi than it is in New York. That’s because the Kenyans were among the first people in the world to adopt the concept of mobile money stored and transferred through mobile phones.

One reason why Third World countries often advance faster than so-called industrialized nations is because Third World countries have no choice. Mobile phones have become far more popular in places like Kenya precisely because traditional phone lines were too expensive to install. Stringing wires across telephone poles around an entire nation is expensive and time-consuming, which meant for years, telephone service was shoddy at best in most places around the world.

In Western Europe and North America, banks are readily available but in Kenya, that was never the case. To get money, you had to travel long distances to a bank and then wait in line to take your money out. Then you were at great risk of being robbed.

So when M-PESA arrived, it eliminated all the problems with traditional banks. Instead of storing your money in a bank and having to get it by withdrawing currency that would be stolen from you, M-PESA allowed Kenyans to store their money electronically and transfer that money through a mobile phone. Now instead of carrying large amounts of currency that you could lose or get stolen from you, you could simply and accurately transfer money from one person to another using a mobile phone.

Your mobile phone essentially becomes like your credit card. In Japan, people have been using mobile phones as credit cards for years, which still isn’t as readily available to people in the United States. Apple created Apple Pay as a secure way to pay for transactions using a mobile phone, but there’s more to Apple Pay than just mobile payments. Apple is likely targeting the mobile payment market like M-PESA already has done in Kenya.

Apple is rumored to be planning to release iMessage for Android. This would allow iPhone users to send text messages to Android users. While they can do that now, iMessage also lets you verify when a message has been delivered. This may seem trivial and pointless compared to ordinary text messaging, but iMessage might also be used with Apple Pay to allow mobile payment transactions.

This will allow you to send or receive money through iMessage. Now you can make secure payments with other mobile phone users and combined with Apple Pay, use your iPhone like a credit card, which is something the Japanese and Kenyans have been doing for years. The idea of Apple porting iMessage to Android sounds trivial until you realize that iMessage could link to Apple Pay for mobile money transfers. Then suddenly the idea of iMessage running on Android makes total sense.

To get an accurate picture of the future, look to what other countries are doing out of necessity or choice. Kenya has no reliable banking system or landline telephone service so they had no choice but to embrace mobile phones and money transfers through mobile phones. That’s the future of mobile phones and money payments. Everyone knows we’re slowly transitioning to a cashless society. While cash will still be around, more people pay for items with credit cards these days. Slowly that will change to making payments with mobile phones instead.

To read more about M-PESA in Kenya, click here.

« Hints of the Apple Car
ReactOS – a Windows Clone »