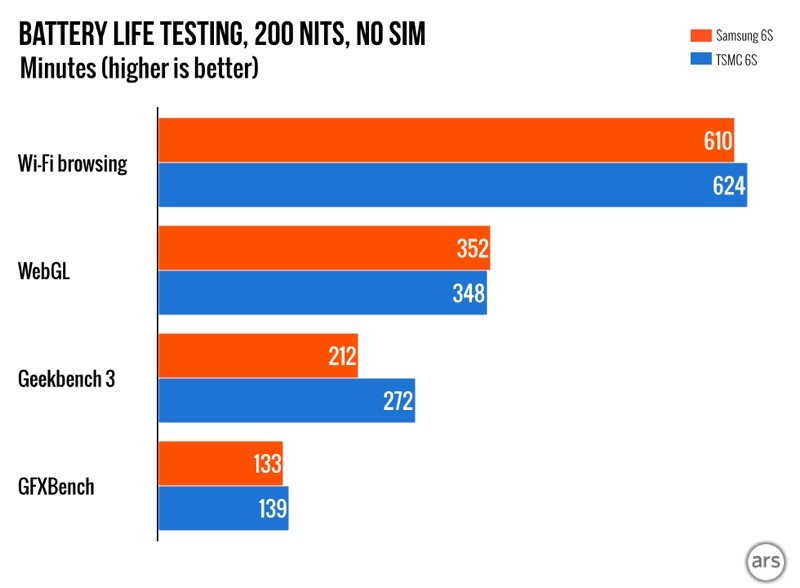 What it is: Apple relies on several different manufacturers to make parts for the iPhone and one of the most crucial parts is the processor made by Samsung and TSMC.

Every year, Apple releases a new iPhone model and every year people try to find something wrong with it (while ignoring the same problems in other phones). First there was the antenna problem where your hand could cut reception if you held the iPhone wrong. Of course other phones suffered from this same problem too.

Second there was the bending problem where the larger iPhone 6 would bend if you sat on it. Naturally other phones bent too with the same or less amount of pressure.

Finally there’s the latest problem where the iPhone 6s is made with processors made by two different companies, Samsung and TSMC. Curiously, Samsung’s processor is smaller (14mm while TSMC’s processor is slightly larger at 16mm, but the TSMC processor runs slightly more efficiently than the Samsung processor, even though both processors are technically identical.

That means if you buy an iPhone 6s, you could get the slightly superior TSMC processor or the slightly inferior Samsung processor. Independent tests show that the differences are relatively minor. Still the fact that the iPhone contains two different processors has suddenly grabbed the headlines.

Of course, other phone manufacturers use different parts as well. They just don’t get the publicity because they’re not as well known.

All of this points to the fact that the iPhone is the number one smartphone brand in the world, so critics love finding ways to tear it down any chance they can get. Both Apple and independent testing shows that the differences between the Samsung and TSMC processors vary from 2%-3%, so it’s not a vital difference. The real problem comes when bugs occur in the operating system that only occur on certain iPhones due to the slightly different equipment inside.

This is a problem with every computer, even with computers made using the exact same parts because one part may last longer than the other, even when made in the same factory. That’s just the nature of parts.

For everyone to get excited about the differences in the iPhone 6s processor is interesting, but ultimately pointless. Check every smartphone and you’ll find different parts with slightly different capabilities. This problem, like so many before, isn’t just limited to the iPhone, but the iPhone grabs all the headlines because of its status as the most popular smartphone in the world.

Should you care which processor is in your iPhone? Maybe, but if technical specifications make that much of a difference to you, chances are good you won’t be happy with anything. A minor 2%-3% difference in performance is trivial compared to your own efficiency in running your own life. Given a choice, your iPhone is the least likely cause of inefficiency in your life.

Click here to read the minor differences between the Samsung and TSMC processors.