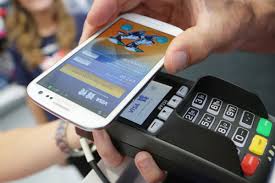 What it is: Samsung is trying to differentiate themselves while selling a commodity product.

Samsung Pay is much like the curved screen displaying information along its edge. Interesting but not crucial. As a result, it’s still not a major reason why someone would want to use a Samsung phone.

The big problem with Samsung Pay isn’t that it basically duplicates Google Wallet or that it mimics Apple Pay but that it tries to give Samsung a unique feature to lock customers into Samsung phones. Yet because Samsung relies on Android, they can’t differentiate themselves too much or else they won’t be compatible with Android apps in much the same way that the Amazon Kindle tablet isn’t able to run any apps but special Amazon apps designed for the Kindle.

Samsung is basically stuck with a commodity operating system (Android) that they’re trying to turn into a unique product like the iPhone. Despite Samsung’s heavy marketing budget, they can’t hide the fact that they’re just another Android manufacturer. Samsung phones may be different than other Android smartphones, but they’re no different than an iPhone and no cheaper either.

Samsung isn’t competing against Apple so much as they’re competing against other Android manufacturers like Xiaomi. While Xiaomi eats away at the low-end smartphone market and Apple continues grabbing the high-end smartphone market, Samsung is left with nothing but gimmicks like the Edge (curved screens) or Samsung Pay (a Google Wallet alternative) to make their products unique but still the same.

As Samsung’s falling smartphone profits signal, this strategy doesn’t work. If Samsung wants to be unique, they need to offer a one of a kind product, which is the purpose of Tizen. Unfortunately to gain support, Tizen must be open source, which means Tizen is just another commodity product like Android. The only difference is that Tizen app sales will benefit Samsung, so few of their competitors will want to support Tizen. Because few competitors will support Tizen, that means less support for Tizen.

Can you see the vicious cycle that Samsung has put themselves in? By trying to copy Apple with a commodity product, Samsung is trying to do the impossible, which is to be unique and the same simultaneously.

Watch Samsung’s smartphone profits continue to fall and watch Samsung get more creative in coming up with more gimmicks to keep themselves in the spotlight while wasting millions in advertising to convince people that their trivial differences are worthwhile features. It’s an exercise in frustration so don’t expect this to end well for Samsung.