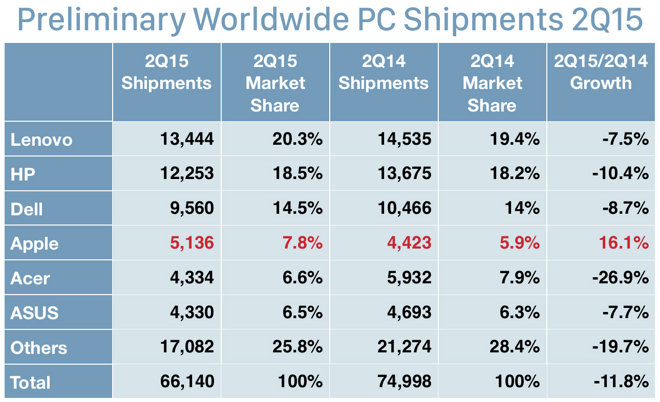 What it is: The market share of the Macintosh has always been much smaller than the Windows PC market. Yet growth of both market shares seem to be heading in the opposite direction.

For decades, Windows PCs kept selling well because a PC was the only way you could get on the Internet, chat, send e-mail, or edit pictures that you could share with friends. When mobile computing arrived in the form of smartphones and tablets, that yanked away much of the reason many people needed a PC. As a result, fewer people are relying and buying Windows PCs. For the past several quarters, sales of Windows PCs has been steadily trending down.

While this might signal the slow decline of desktop and laptop computers in general, sales of Macintosh computers defy the declining trend. Instead of sinking, sales and market share of the macintosh just keep growing. Originally the Macintosh shrank to roughly 2% of the total market. Now it’s steadily heading upwards. So the big question is why are Macintosh sales going up while Windows PC sales going down?

The easy answer is that more people are switching from a Windows PC to a Macintosh rather than the other way around. People still need a computer. They just don’t need (or want) Windows. Often times people have a Macintosh at home and a Windows PC at work. While companies still rely on Windows PCs, the rest of the world does not and can get along just fine with smartphones, tablets, and Macintosh computers.

A larger reason might be that people find the Macintosh keeps its value far longer than a similar Windows PC. So even though a Macintosh may cost more initially, you can also resell it later for more at the same time. The Macintosh also doesn’t suffer from bloatware, which are third-party programs that manufacturers load on to a hard disk to make a little extra money while inconveniencing the user at the same time. If you’re tired of dealing with bloatware, then you’ll either have to get a bloatware-free PC from the Microsoft Store, or just get a Macintosh.

One reason why Macintosh sales might keep rising is that the Macintosh requires far less maintenance than a Windows PC. There’s no need to constantly defragment your hard drive, clean the Windows registry, or run anti-virus programs all the time. With less hassle to worry about, the Macintosh saves people from the headaches of learning how to maintain a computer, which wastes time that they could actually be using a computer. Remember, people don’t buy a computer so they can spend all day long trying to make it work. People buy a computer to get results, whatever those desired results might be. The fastest way to achieve results with any computer is never to spend time maintaining and fixing it.

Watch sales of the Macintosh continue trending upwards as sales of Windows PCs continue to stagnate. Think Windows 10 will generate enough excitement to bring people back to a Windows PC? Maybe, but what will convince people to stop using their smartphones and tablets and rely on a Windows PC instead? Most likely nothing, so Windows 10 may generate a small increase in sales, but it won’t be sustainable over the long-term because people simply don’t need a Windows PC any more.

In the old days, a Windows PC was crucial. Today, it’s an afterthought. More people are starting to access the Internet through mobile devices like smartphones and tablets, so it’s highly unlikely the world will turn its back on mobile computer devices and go back to desktop and laptop PCs. The Windows PC isn’t doomed, but its glory days are long behind it that no new operating system version can ever resuscitate again. The PC world is no longer the center of the computing universe, and that’s why PC sales will continue sinking as the rest of the world grows up with mobile computers in their hands.

Read more about the sales trends of Windows PCs and the Macintosh.