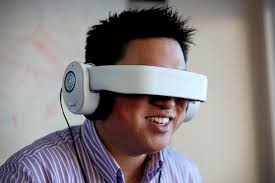 Just because something is technologically advanced doesn’t mean it will necessarily be adopted. Technology is more than technical specifications but also emotional and psychological acceptance, and that’s where virtual reality falls flat on its face.

A virtual reality headset requires strapping a device to your face so you can see a virtual world while keeping your hands free. That’s important for virtual training sessions or specialized tasks where you don’t have to leave the room, such as performing long-distance virtual interaction with others. In isolated environments, the drawback of having a virtual reality headset strapped to your face won’t matter because nobody will see you.

Think of the difference between Google Glass and the Apple Watch. Both are wearable computers, but Google Glass is wrapped around your face at all times whether you’re using it or not. The Apple Watch is out of sight until you need it. It’s not visible until you purposely make it noticeable.

Yet with augmented reality, you can look like a normal person and walk around in public. Only when you want to see it can you choose to view the augmented reality by aiming your smartphone or tablet camera at an item. Then you can put it away. Augmented reality gives you the choice of dealing with reality or seeing augmented reality. Virtual reality forces you to immerse yourself completely in its environment, which makes it handy for hands-free operation but only in a space where nobody minds being seen with a virtual reality headset clinging to their face.

In the same way, virtual reality is best for dedicated tasks where you’re in an isolated environment such as your home playing a virtual reality game. It’s not suitable for walking around in public on a regular basis. Augmented reality is best for everyday use, but if you need a more immersive environment, then augmented reality requires you to hold a camera up constantly, which can get tiring over time.

So when you look at devices like Google Glass or Microsoft HoloLens, the technology may be fine, but the practical uses are far more limited. If you aren’t going to be using a wearable computer 100% of the time, there’s no need to have it visible and interfering with your appearance 100% of the time. Google Glass and Microsoft HoloLens will find their niche purposes, but it’s never going to be a general purpose device that people use in their everyday world.

The Apple Watch is something people can use everyday because they can tuck it out of sight when they don’t need it and use it when they do need it. Augmented reality will likewise find greater acceptance in everyday use since you can choose to use it and tuck it out of sight when you don’t want to use it. Anyone going to constantly take Google Glass or a Microsoft HoloLens on and off during the day?

To learn more about Metaio, a company that Apple recently acquired for its augmented reality technology, click here.