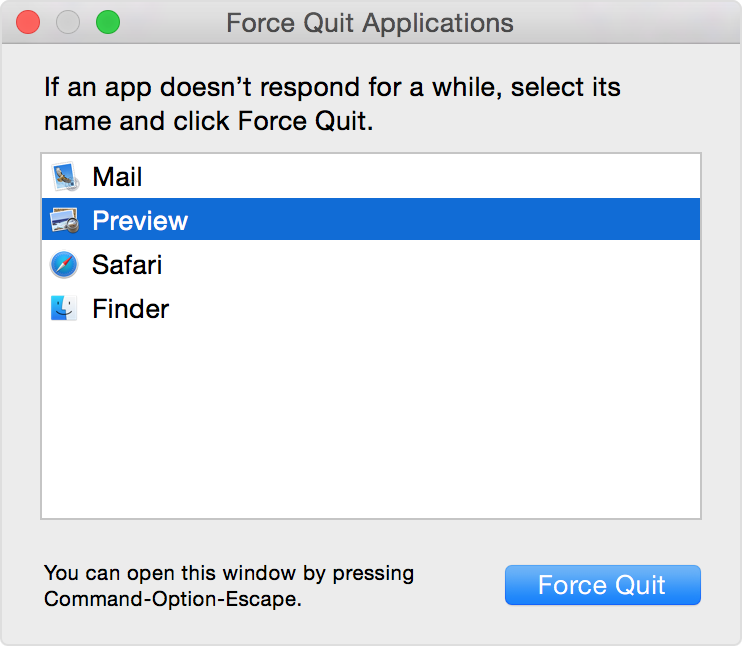 When computers work, they’re wonderful but when they don’t work, you want to throw a brick through the monitor or shoot the computer like one man did with his Dell PC.

Often times when computers don’t work, you can give them a literal smack in the head by using the Force Quit command. In OS X, you can open the Force Quit window by pressing Command+Option+Escape or by clicking the Apple menu and choosing Force Quit.

This Force Quit window displays a list of all running programs so you can just choose the program that’s frozen or stuck, and click the Force Quit button. This shuts down the problematic program, allowing you to restart it again and hope it behaves itself.

If you’re running iOS on an iPhone or iPad, you can Force Quit an individual app by tapping the Home button twice to see thumbnail images of all currently running programs. Then swipe left/right until you see the offending program. Finally, swipe up to remove the program from memory and force it to quit.

If your entire iOS device is acting flaky, you can force quit the entire device by holding down the power button while holding down the Home button. You can also just hold down the power button until a screen pops up with a slider that reads “Slide to power off.” Then just swipe this slider to power off, wait a minute, and turn your iOS device back on again.

Force quitting is a drastic but harmless way to knock some sense into your computer and get it working again. Most of the time you’ll only need to do this occasionally, but if something keeps causing problems, then you either have a corrupt app or a faulty device.

In that case, back everything up, tap the Settings icon, tap General, tap Reset, and tap Erase All Content and Settings. This restores your iOS device to its original factory settings.

Now you can reconnect your iOS device to your computer, restore your data and settings from your iTunes backup, and hopefully have a working iOS device once more.

Always remember the Force Quit command. You may not need it often but when you do need it, you’ll want to use it to get everything working again as quickly as possible.